HOW PENCILS ARE GRADED

Many prominent pencil making companies such as Staedtler and Conté have been around for hundreds of years, and some were actually instrumental in the development of the modern drawing pencil. Between them they developed a system for using a graded scale that defined the degree of softness and darkness of a drawing pencil. In this post I’m going to take a look at how pencils are graded, and how to choose the right grades (and makes) of pencil for your work.

How the grading scale came to be

In one of the world’s most enduring misunderstandings, the ‘lead’ of a pencil never had anything to do with elemental lead but has always been made from graphite, which is a crystalized form of carbon. When a large deposit of graphite was discovered in Cumbria, England during the sixteenth century it was mistaken for lead ore. The name stuck because the actual nature of graphite and its distinction from lead was not understood for over two hundred years.

Initially the graphite from the Cumbrian deposit was used by shepherds to mark and identify their sheep, but by the 1800s a thriving pencil manufacturing industry had grown up in the county. Attempts at extending the limited supply of graphite by mixing it with gums, glues and resins were unsuccessful and so square-shaped pencils made with rods of pure graphite were produced for many years. 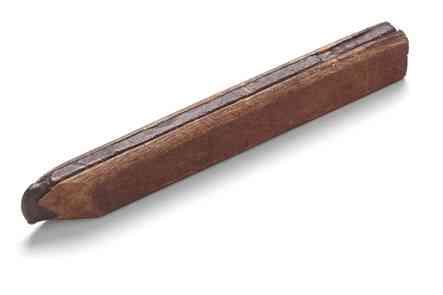 The world’s earliest known pencil! This belonged to a carpenter from the 17th century and is now displayed in Faber-Castell’s pencil museum. Before the invention of ‘graded’ leads, pencils were simply lumps of pure graphite cut into sticks. Photo credit: Faber-Castell

It was Nicolas-Jacques Conté, the founder of the famous Conté à Paris pencil making company who is often credited as the inventor the modern pencil. By 1785 he had mixed lesser quality graphite with a binder of clay and fired it in a kiln before encasing the baked rod in a wooden covering. Almost simultaneously the Austrian Joseph Hardtmuth, founder of the Czech-based Koh-I-Noor Hardtmuth pencil company was exploring the same method. Both men took out a patent on the clay and graphite, kiln-fired pencil: Conte in 1795 and Hardtmuth in 1803.

Conté and Hardtmuth had both discovered that by varying the ratio of graphite to clay, you could produce pencils of varying softness and darkness. The more graphite was in the mixture, the softer and darker the pencil would be. The more clay was added, the harder and lighter the mark it would make.

By the early nineteenth century an early version of what we now call the ‘HB’ grading system had been established. This system was likely based on the English words ‘Hard’ and ‘Black’ whereby ‘HB’ stood for a ‘slightly hard’, and ‘slightly black’ pencil. Softer leads were labelled ‘B’, ‘BB’ or ‘BBB’ and harder ones were designated as ‘H’, ‘HH’ or ‘HHH’. This origin is disputed by the Koh-I-Noor company who claim that the ‘H’ designation was named after their founder Joseph Hardtmuth and ‘B’ for their location in Budejovic!

These designations were soon refined into the modern pencil grading system we know in Europe today. Here the ‘HB’ grade is considered to be the middle of the scale. A standard writing pencil of the type we all used at school has about the equivalent of an HB grade clay-to-graphite ratio. The very softest ‘B’ pencil leads may contain up to 90% graphite and tend more towards a black colour. The hardest ‘H’ leads may only contain 20% graphite and are very grey in tone.

Between HB and H is the ‘F’ grade, which is something of a quirky anomaly. The F pencil is thought to have been developed for the Japanese market, where softer pencils are generally preferred. A Japanese ‘HB’ grade was found to be too soft for writing and so the F (standing for ‘fine’ or ‘firm’) was introduced as a writing pencil, and then somehow found its way into the artists’ pencil tin. In fact the F pencil isn’t especially fine, but it can be sharpened to a finer point than an HB because it has slightly more clay. It’s considered to be a ‘half grade’ between HB and H.

Variations between ranges, and sets of pencils

Companies don’t all produce the same number of grades for their pencil ranges. The most extensive range is probably Staedler’s Mars Lumograph pencil which comes in grades between 10H and 12B. Other ranges make a much more limited number: Conté à Paris’s graphite sketching pencils run only from 3H to 6B. Whichever make you buy, you’re very unlikely to want to use every available grade within one drawing, and will probably prefer a selection of harder or softer pencils depending on what type of work you are doing.

Typically the harder ‘H’ pencils are used by designers such as graphic artists, people who do technical drawing and engineers. They are good for very precise drawing or for laying things out.

Artists making fine art sketches are very unlikely to work in the higher H grades because it’s quite hard to be expressive with them. I draw pencil portraits and use a range of grades from 9B through to about 2H, but rarely anything harder.

The softer and darker the pencil the more of the paper texture it will pick up as you shade and the softer your drawing will look. You can soften and smudge your shading when using B grade pencils. H leads will hardly smudge – especially 3H or harder – whereas all B grades will smudge easily.

If you buy a tin of graphite pencils which is usually the most economical way to purchase your first set, you will typically get around 12 pencils.  A set will often feature either a collection of some of the harder grades (HB to 9H), the medium grades (6B-4H) or soft grades (H through to 8B or 9B).

Before you choose a pencil range and purchase some pencils, it’s really worth doing your research to find out whether the range you are interested in runs hard or soft because there is massive variation between manufacturers.

It’s very important to understand that although all pencil makers apply the same HB scale designations, there is NO industry standard for exactly how light or dark each grade should be. You’ll find huge variation between the tones of pencils from different ranges, with some much darker than others. Therefore for example, a B pencil from one brand may be as dark as a 4B or 5B from a much lighter range. This diagram compares the ranges of many of the best sketching pencil brands. You can see how the inconsistencies between tones for each grade between different manufacturers. 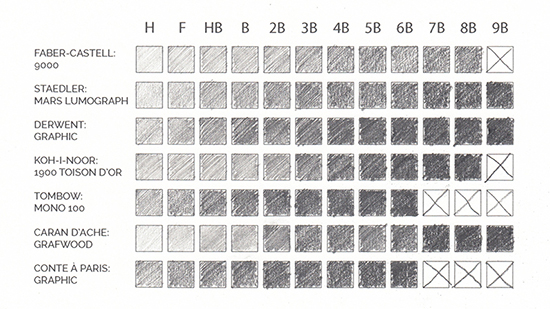 Adding to this discrepancy, many manufacturers have now supplemented their regular graphite pencils with extra black ranges with names like ‘Noir’ ‘Nero’ or ‘Onyx’. These are pencils made with added carbon to produce much blacker tones. These much darker pencil ranges will also be graded using the HB scale, even though they are many shades darker than a regular graphite line.

How the HB Graphite Scale relates to the US numerical scale

In Europe, the HB scale is the only system for grading pencils that we are familiar with. In the US however whilst the HB scale is usually used to grade artists’ pencils, other pencils such as writing pencils are graded according to a numerical system. Early American pencil manufacturers were influenced by Nicolas-Jacques Conté who graded his pencils between numbers one and four. The modern US pencil scale still only ranks pencils of medium hardness, rising from a #1 which is equivalent to about a B pencil to #4 which equates to something like a 2H. It is generally accepted that the HB scale and the US numerical scale compare like this:

However since companies vary so wildly in the general tone of their pencils it is hard to find any reliable standard for equivalence. For example Faber-Castell, another of the oldest and most celebrated pencil making companies in the world, makes very light pencils and consider that their HB pencil equates not to a #2 but to a #2 ½ in the numerical scale. With a much darker range such as Derwent’s Graphic range a numerical grade of #2 would probably equate to a one of their H or 2H pencils.

Choose the right pencil range and grades for your work

How does the huge variation between different manufacturers’ pencils affect how you should choose which range to buy? The obvious answer is that if you want to draw very darkly then you would go for a darker, softer range whilst if you want to draw with a lighter touch you’ll prefer a harder pencil line.

However if there’s one particular range of pencils that you prefer, you could in theory choose to simply buy the harder grades (if the range runs too dark for your tastes) or the softer grades (if the pencils are too light) To help you decide, this independent review of drawing pencils assesses all of the famous pencil ranges on the chart above, noting how hard or soft they are, how well made, and why you might choose them.